by Cassondra Kame on October 9, 2020 in Education Foundation
CLOSE 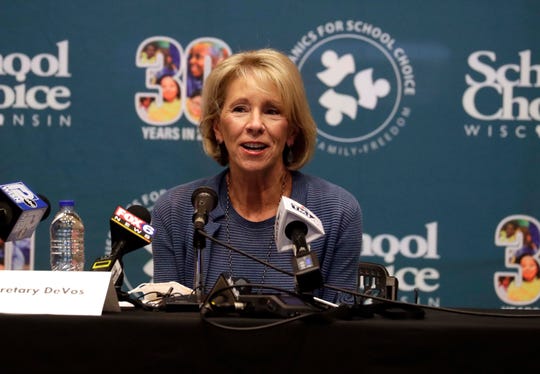 Secretary of Education Betsy DeVos touted school choice in a visit Thursday with parents in Waukesha, saying many families have been unhappy with education during the pandemic and should be able to decide what school is best for their children.

DeVos took part in a roundtable discussion with parents, most of whom had moved children to private schools — some through taxpayer-funded vouchers — so they would have in-person instruction.

“We know that the last several months have been tough for families, for parents and for kids,” said DeVos, who described the educational experience in Wisconsin and across the country as “uneven.”

“More than ever, parents have a keen understanding of what their children need to learn, how they learn,” said DeVos, a longtime advocate for taxpayer-funded vouchers and other mechanisms that allow children to attend private, often religious schools. “And now more than ever, I think there is an argument for parents being able to take more of that control and have more of those choices.”

Thursday’s event was DeVos’ second trip to Waukesha since June, when she joined Vice President Mike Pence in kicking off President Donald Trump’s Wisconsin campaign in what has been a traditional Republican stronghold.

It came as Wisconsin shattered previous daily records for the coronavirus, with more than 3,000 new cases and nine deaths, bringing the state’s death toll to 1,424.

As part of the roundtable, moderated by Calvin Lee of the school choice advocacy group American Federation of Children, parents recounted their disappointment with their children’s virtual learning experiences and their decision to send them to private school. They spoke of falling grades and feelings of isolation and depression. All said their children were thriving after the move.

“It’s been a life-changing event,” said Amy Wiczek, who moved her son from Whitnall High School to Catholic Memorial in Waukesha for his junior year.

She and at least one other family did not qualify for vouchers because of the income cap, and they told DeVos the caps should be eliminated so everyone can take part.

“I want everyone to be able to have these choices,” Wiczek said.

DeVos and Trump have used the pandemic to promote school choice around the country. Both have insisted that schools need to reopen for in-person instruction and have suggested that federal funding be withheld from those that do not.

Many schools, public and private, have remained in virtual mode, in an effort to stem the spread of the coronavirus. Many public school advocates argue that school choice bleeds needed resources from public schools and have criticized Trump and DeVos for prioritizing private schools over public schools, which most American children attend.

“Teachers are going above and beyond to keep students safe and learning during a pandemic, but DeVos continues to campaign for Trump and his mission to force taxpayers to foot the bill for private school tuition,” Christina Brey, spokeswoman for the Wisconsin Education Association Council, said in an email to the Milwaukee Journal Sentinel. “DeVos has done nothing to help public schools, especially those that serve low-income students.”

DeVos said the Trump administration has invested in public schools, pointing to the $13 billion allocated by Congress for schools as part of the CARES Act relief package. But many districts say it is not enough to cover the costs of reopening safely.

In addition, DeVos was widely criticized in July when she issued a ruling aimed at shifting millions of dollars in CARES Act aid from public to private schools. Democrats and some Republicans in Congress said the rule conflicted with the intent of the bill. Several states, including Wisconsin, filed suit, and a federal judge struck down the rule in September.

Despite the spike in COVID-19 cases in Wisconsin, most public and private schools across the state appear to be offering at least some in-person instruction.

And many private schools, including those that accept children on taxpayer-funded vouchers, have emphasized in-person instruction, even in places like Milwaukee, where the state’s largest school district and most if not all independent charter schools have started the year virtually.

Numerous COVID-19 cases have been reported in schools across the state, forcing some schools to pivot between in-person and virtual instruction and pushing thousands of students, staff and family members in quarantine or isolation.

On Wednesday, the superintendent of the Markesan School District, about 45 minutes southwest of Fond du Lac, died after a three-month battle with COVID-19. Milwaukee Public Schools, the state’s largest district, which is in all-virtual mode but has staff members in its buildings, has had 64 coronavirus cases since Aug. 7.

Wisconsin is home to the nation’s oldest taxpayer-funded, private school voucher program, in Milwaukee. Today, more than 43,000 students attend private schools on  vouchers across the state. And at least 16,000 attend public, independent charter schools, most of them in Milwaukee.